It's confession time. I learned to make these little guys in middle school home economics. Do they even still have Home Ec classes? I love these so much that I learned to make them all those years ago (more than I'd like to admit... ahem), and I haven't stopped making them since. I've made some adjustments over time, but at the end of the day I'm pretty dang thankful that I learned the basics of this.

I loved Home Ec! I think I may have been one of few, but it was a fun class for me. It was about all of the things I enjoyed doing with my grandma. I remember sewing aprons in class and I chose a navy fabric that had glitter gold stars on it. I had been sewing for several years already with my grandma so it was just another fun project for me. I kept that apron for a long time. I still love aprons today, I just happen to buy them rather than sew them. I'd probably sew them if I felt like I had the time to just sit down and enjoy it.

Second confession: I'm not really a huge fan of baked potatoes. I'm not big on just a plain 'ol baked potato. I like them either stuffed to the brim with extras or twice baked. Bonus points if they've been baked in the oven with a crispy, salty skin. Those plain baked potatoes you sometimes get in a restaurant with just a pat of butter... no thanks. Hard pass. I feel like at that point why waste the calories? I'd rather spend those calories on something else or not at all.

The name says it all here --- twice baked. If you're like me and sometimes get a little lazy, you can definitely short cut the first baking by doing them in the microwave. All microwaves and potato sizes are different so it's hard to say just how long. I normally use the potato button my microwave, but it usually ends up being about 5 minutes each. Either way, it's up to you on how you want to bake your tater. 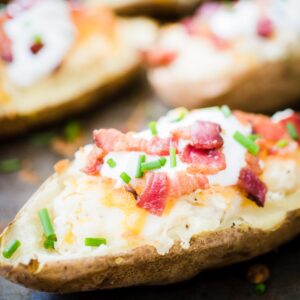 WW Freestyle Points: 10
Have you tried this recipe? Please let us know how it was in the comments or tag us on Instagram @sweetlysplendid!

***These can also be made ahead of time. Follow steps 1-13, cover and place in the refrigerator until ready to bake. 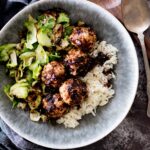 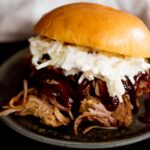 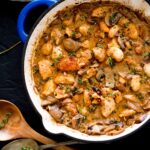 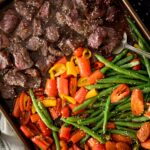 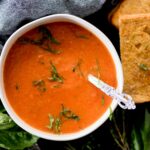 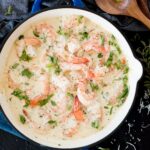