Slow Cooker Potato Soup - you can make homemade potato soup from scratch right in your crockpot. This soup is loaded with bacon, potatoes, and cheese.

This post may contain affiliate links. This means if you decide to purchase through my link, I may earn a very small commission at no additional cost to you.

If you have vegetarians in your house, you can swap the chicken stock for vegetable stock and omit the bacon.

What is the best potato for potato soup?

Stick with a Yukon gold style potato. Not only will you end up with an overall better result for your soup, but you also won't have to peel them either.

Should you peel potatoes for potato soup?

If you use Yukon gold potatoes, it is not necessary to peel the potatoes.

Should I soak my potatoes before making potato soup?

No. If using Yukon gold potatoes you don’t need to soak your potatoes before making potato soup.

How to Make Crockpot Potato Soup with Evaporated Milk

Detailed instructions and measurements are listed in the recipe card at the bottom of this page.

Is soup better in a slow cooker?

Most soups are often better in a slow cooker because it gives it time to cook longer. The longer it simmers together, the more flavor it develops.

Can you put raw potatoes in a slow cooker?

Yes, absolutely. You just want to be sure you leave them in long enough to fully cook. Keep in mind that the larger the pieces, the longer it will take to fully cook.

What potatoes are best for soups?

I personally prefer to use any form of Yukon gold potatoes. You'll want a waxy type potato that you don't need to peel. It will help it to hold up in the soup.

Can you use evaporated milk in soups?

Yes, you can use evaporated milk in soups. It will help add creaminess and flavor.

Will evaporated milk curdle in soup?

As long as you don’t overheat the soup, evaporated milk will not curdle. Make sure the evaporated milk is either room temperature or has been temperate to avoid curdling.

What is the best way to thicken potato soup?

The roux, greek yogurt, and potatoes will help thicken this potato soup. The cheese will also make it nice and creamy. If you'd like to thicken it further, you can mash some of the potatoes in the soup.

Can I use evaporated milk to thicken soup?

Evaporated milk alone will not thicken the soup. It will however add richness and creaminess.

Can you overcook soup in a slow cooker?

Yes, you can overcook soup in a slow cooker. By turning the heat too high or cooking too long at high heat, your soup can overcook.

The great thing about potato soup is that it can be a complete meal. Instead, you can choose different toppings for your soup. Some great toppings include:

You can totally make this point friendly!

How to Store, Freeze, and Reheat Potato Soup with Evaporated Milk

Once the potato soup has cooled, you can store it in an airtight container for up to 4 days in the refrigerator.

To reheat, place in a saucepan on the stove top over medium heat. You can also reheat in the microwave, but be sure to heat gently because of the evaporated milk and cheese.

I would not freeze Slow Cooker Potato Soup. It's not a recipe that holds up well as a freezer meal. 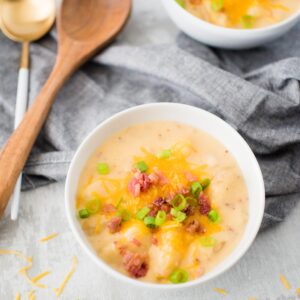 Optional Toppings (anything you'd top your baked potato with!)

Did you love this recipe? Let us know! Cancel reply

Kara is a wife & mother living deep in the heart of Texas. She loves all things food and spending time with her family and dogs. She has a passion for cooking and loves making yummy, family-friendly recipes.